CFT Holdings Limited is a leading new generation vertically integrated energy company which is registered in Hong Kong. We are focused on unconventional resources and our objectives are to identify and commercialise Coal Seam Gas (CSG) or Coal Bed Methane (CBM) resources and assets throughout the world, with particular focus on Asia. Our scope includes CSG development, pipeline asset acquisition, electricity generation, liquefied-natural gas projects and downstream-related industries.

Through the acquisition of CFT Holding (HK) Limited (CFT Acquisition), the Company has secured the rights to explore and develop over 40 mining interests located in the Heilongjiang Province of North-East China pursuant to the terms of the Co-operative Joint Venture (CJV) with Heilongjang Longmay Mining Holding Group Co., Ltd (Longmay). 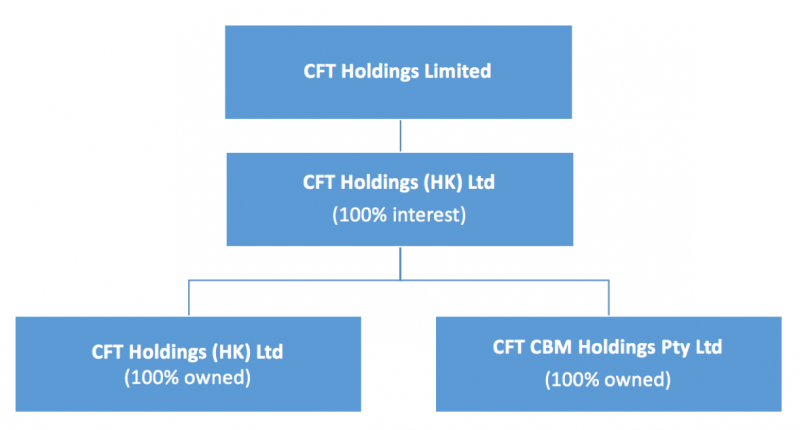 Mr Marchiandi is a founding member of the CFT Holdings HK Group, having started the company in 2007. After extensively travelling to China, he has a significant understanding of the CBM business in China and the greater Asian region.

Mr Marchiandi is a Mechanical Engineer and is currently the Managing Director of two (2) other privately owned non-related entities specialising in CBM, CMM and diesel fuel. He is the founder of both companies and is responsible for all facets of the business, managing over 50 employees, including research and development engineers.

Mr Marchandi’s companies are leading experts at the utilization of coal bed and coal mine methane. The companies have been involved in over 300MW of power generation using Australia’s CBM and CMM reserves. Investigations are being undertaken to utilize the CBM and CMM as a transport fuel which will replace Australia’s dependence on diesel fuel.

Mr Pertich is the Chief Financial Officer and Joint Company Secretary of the Company.

Mr Pertich has over 16 years practical experience in various business advisory and commercial roles including audit work, due diligence, forensic and corporate accounting and dealing with multi-national companies and their specific requirements.

Mr Pertich is a founding member of the CFT Holdings (HK) Group since 2007. Over this time Robert has frequently visited China which has provided him with a thorough understanding of the CBM business in China. During these visits, he has been a leading part of the China CFT Holdings negotiation team as well as successfully networking with the various coal mining organisations and political PRC delegates that has contributed to the CFT Holdings business in China.

Mr Pertich undertakes a variety of roles within the Company due to his broad knowledge and skill base. Mr Pertich is a Certified Practising Accountant, and holds a Bachelor of Economics (Accounting).

Mr Rod Bresnehan has over 35 years’ experience in the energy business, as a principal Reservoir Engineer he has specialised in the upstream oil and gas sector in the areas of resource and reserve petroleum development, project management and implementation.

His career began with the Bureau of Mineral Resources (Geoscience Australia) in Canberra and served on the inaugural committee of the Society of Petroleum Engineers (SPE) in Australia of which he still remains highly involved with today.

Mr Bresnehan has advised many Australian, European and Asian petroleum companies on exploration, reservoir engineering and commercial development of Unconventional Hydrocarbon projects. At present, Mr Bresnehan is a director of European Gas Limited (ASX:EPG), the Principal consultant to NuEnergy Limited (ASX:NGY) in their Indonesian projects and as CBM asset manager for Mitsui E&P Australia.

Since 2008, Mr Bresenehan’s has been Chief Technical Advisor to CFT Holdings, overseeing the developments of the project advancement in China.

Trevor is a Director of CFT Holdings (Hong Kong) as well as Managing Director of Australis Resources (Australia) and PT. IndoAustralis (Indonesia). Trevor has spent many years in both CFT Holdings and Australis Resources in the areas of business development, direction and opportunity. He has been heavily involved in the negotiation and relationship building processes for both Australian and Asian projects (i.e. China, Indonesia and Myanmar).

A key area of Trevor’s strength is in building cultural and social relationships. An example of this was the project in Hegang in Northern China, where he was involved in initial negotiations, relationship building, recruiting of personnel (both skilled and unskilled), followed by hands-on civil works implementation for the drilling process. This involved dealing with local farmers, government bodies, service providers such as gas and power companies, and sourcing power grid, road and gas pipeline infrastructure.

Trevor is very invested in the environmental and human impact that our projects place on the local people and landscape.

Thank you for your message, we will be in touch very shortly.

Sorry, there has been a problem and your message was not sent.